The threat of a “nuclear weapon detonation event,” be it accidental or deliberate, is now the highest it’s been since the end of the Cold War, 26 years ago, a UN agency has warned, saying the risk is rising as relations between nuclear powers deteriorate.

With over 15,000 nuclear weapons possessed by nine states, the world now appears “full of potential for catastrophe,” warns a comprehensive study from the UN Institute for Disarmament Research (UNIDIR). 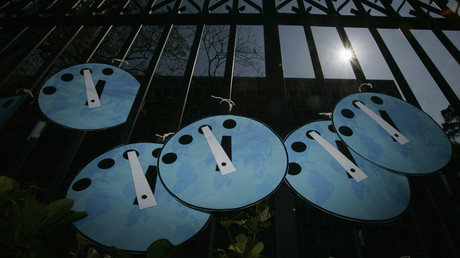 “The threat of a nuclear weapon detonation event in 2017 is arguably at its highest in the 26 years since the collapse of the Soviet Union,” said the research paper composed by several reputed scholars and disarmament experts.

Nuclear deterrence was, and still is, the backbone of the military strategies of many world powers. Overall, nine states – the US, Russia, China, the UK, France, India, Pakistan, North Korea, and Israel – possess more than 15,000 warheads, and global investment in the modernization and development of new, more capable and mobile nuclear weapons continues to rise.

One of the major factors threatening global security is the current state of US-Russia relations, the researchers argued.

“The return of Cold War-like confrontational postures has hindered international cooperation and confidence-building,” the paper said.

After Crimea’s reunification with Russia, the US quadrupled the budget for its European Reassurance Initiative to $3.4 billion in February of 2016, saying it was specifically intended “to deter Russian aggression.” Moscow, in turn, has deployed troops and weapons, including short-range Iskander missiles, in its westernmost enclave, Kaliningrad, in response to NATO’s massive military buildup along its borders

Comparing today’s security environment to that during the Cold War, the authors argue that the bipolar world appeared to be more predictable, and therefore more secure. The so-called mutually assured destruction (MAD) principle proved sustainable, unlike “current geopolitical complexities and expanded club of nuclear actors [which] exacerbate the inherent dangers of nuclear deterrence.”

US actions can see nuclear war ‘break out at any point’ – N. Korean UN envoy

The study comes as the US is launching a massive trillion-dollar program to modernize, support, and maintain its nuclear air-land-sea triad over the next 30 years. The colossal sum will be spent upgrading certain weapons systems, such as Minuteman III missiles first deployed 40 years ago, and the US Navy’s fleet of 14 Ohio-class nuclear submarines, according to Bloomberg.

In addition, the US Air Force has selected Northrop Grumman to develop and build a new long-range bomber to replace the Eisenhower-era B-52 at a projected cost of $80 billion. In the meantime, the Pentagon has begun preparing its latest Nuclear Posture Review, which could see the US turning back to confronting near-peer countries like Russia.

The 2010 review, which was written during the Obama administration, stated that “Russia and the United States are no longer adversaries” and listed nuclear terrorism as the biggest security threat. However, given how hostile relations between Moscow and Washington have recently become, this year’s document is expected to take a different stance.

Aside from uneasy relations between the US and Russia, the UNIDIR report cited the recent flare up in tensions on the Korean peninsula, where North Korea and the US continue to raise the stakes by flexing military muscle.

The White House has threatened to solve the “North Korean problem” with or without international support and sent the USS Carl Vinson strike group to the region. This has prompted an angry response from Pyongyang, which has promised to retaliate for an invasion with all means available, including nuclear weapons.

The report doesn’t see a reduction in America’s nuclear arsenal as a solution to worldwide nuclear tensions, however.

“Any weakening of the United States’ nuclear umbrella could spur further adventurism by adversaries and proliferation by allies,” the report claimed.

“Nuclear deterrence works – up until the time it will prove not to work… the risk is inherent and, when luck runs out, the results will be catastrophic,” it warns.