Most terrorist groups today are a product of political, financial, and military efforts from the outside of the country where they operate, Russian Deputy Defense Minister, Aleksandr Fomin, told RT ahead of the VI Moscow Conference on International Security.

With terrorist attacks looming large, Fomin said the world is currently witnessing some kind of a hybrid political and military phenomenon, gaining momentum.

“These are some new techniques, and revolutions are exported to different states that are supposedly suffering under undemocratic regimes. So-called democratic regimes are being planted in these countries from the outside,” Fomin said.

“Because of this policy, some states ceased to exist; others are on the verge of disappearing. Look at Syria now, and Yemen. We can ask ourselves – who’s next?”

The deputy defense minister spoke to RT ahead of the Sixth Moscow Conference on International Security, scheduled to take place on April 26-27, where the topic of international terrorism will be high on agenda.

“It is obvious now that the threat of the 21st century cannot be eliminated by just one country. It will only be possible if we work together,” Fomin stressed.

“Some terrorist organizations – or even, I would say, the majority – do not just appear out of nowhere all by themselves. Rather they tend to be the product of political, financial and military efforts coming from  outside a country. As a rule, these groups are created to do someone’s bidding – they are nothing but puppets,” Fomin said. 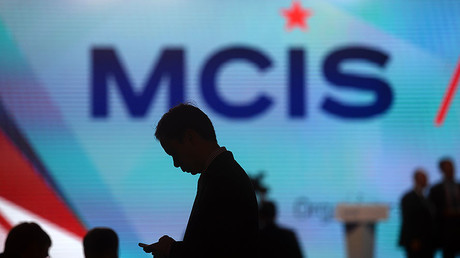 The Russian Defense Ministry has been staging the large-scale Security Conference annually since 2011. The forum offers an exclusive opportunity for international defense officials, organizations, NGO experts, and journalists to address key security issues.

Fomin said mounting threats and challenges that pose an “existential threat to the global community, to every state and every individual,” will dominate the agenda this year.

Security in Europe, the Asia-Pacific, Central Asia, and the Middle East will also be addressed.

“When we talk about threats to the security of any state, this is more than just words. This is already a reality,” Fomin said.

Building up the dialogue between military top brass from across the world is key to neutralizing global security threats.

“The reason why our conference is notable is because it was organized by the military, initiated by Russia’s Defense Minister, and because the underlying idea is to have a conversation with our colleagues – with other military men – who know the true price of international security, the true price of human life and the true price of peace,” he said.

“We’ve received confirmation from representatives of 78 states. Of them, over 20 delegations will be headed by ministers of defense. The total number of guests is on par with the previous conference, which is about 700 people, 500 of whom represent foreign countries,” Fomin added.

NATO’s top leadership and member states’ officials were also invited to the Security Conference, Russia’s Defense Ministry said last month, reaffirming its persistent pursuit of open dialogue amid the alliance’s firm rejection of military cooperation with Moscow. The military alliance opted to put cooperation with Russia on hold in 2014 following a coup in Kiev that triggered an armed backlash in the east of Ukraine and a referendum in Crimea to join Russia. NATO accused Russia of direct involvement in the Ukrainian conflict, despite Moscow’s repeated denial of the alleged “aggression.”