We know Riyadh has invaded Bahrain to suppress lawful and legal protests that were going on there, and they have also attacked the indigenous of Yemen, the Houthis, Raza Kazim, Islamic Human Rights Commission, told RT.

A cross-party group of British MPs have to decide whether to call for the suspension of UK weapons sales to Saudi Arabia or not. The British Prime Minister Theresa May insists sales should continue, and claims the close ties to the country are necessary to keep British people safe. 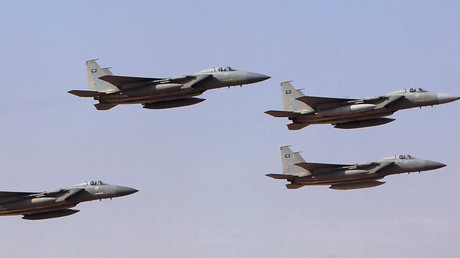 Her comments came after some British MPs called for the UK to halt its weapons sales to the Middle Eastern nation. Members of the Arms Export Controls committee claim that British weapons might have been used in violations of international humanitarian law.

RT: The Prime Minister’s comments have now been backed by the Foreign Minister, Boris Johnson. Yet reports suggest quite the opposite. Why are Britain’s decision makers going against the clear findings?

Raza Kazim: I think we need to look at the plethora of evidence that has been gathered. The Committee itself has said that the UK government is probably in violation of its international human rights obligations due to the way that the weapons that have been supplied by the UK have been used. It is said that the assurances supplied by the Saudi government are also not sufficient, not acceptable and so on. Yet, the UK government continues. We need to understand that basically the UK government is acting like a pimp, and is reaping the benefits of the dirty work that Saudi Arabia is actually doing. This needs to stop.

RT: Saudi Arabia is claiming if the UK suspends arms sales, there might be even higher risks of terrorism spreading. Is that a valid point?

RK: There is no evidence to suggest that. Saudi Arabia is the one that is carrying out acts of terrorism. We know that it has invaded Bahrain to suppress lawful and legal protests that were going on there. We’ve seen how Saudi Arabia has attacked Yemen and the indigenous of Yemen, as well, the Houthis, who have been wanting to have self-determination in terms of who is governing them, rather than something that is imposed from Riyadh. We’ve seen that various organizations, Save the Children, have come out and said that they are not happy with what has been going on. Hospitals, schools and school teachers, head teachers, etc. have been bombed by Saudi Arabia. We’ve seen the facilities of   Médecins Sans Frontières [(MSF) Doctors Without Borders] hospitals being bombed and verified by MSF.

Yet, despite all the evidence that has been gathered in terms of what has been going on, the UK government continues this. We need to be aware that the intelligence offices and people from the UK military establishment are embedded in the command and control center of where these strikes take place. This has been verified in various ways – by both Saudi Arabia and the UK. We know that this is going on continuously…

Not easy to resist temptation of easy money

Daoud Khairallah, International Law professor at Georgetown University said that it has not been easy for Britain, the US, or other countries that are providing Saudi Arabia and its allies with weapons, “to resist the temptation of money and corruption.”

RT: The Prime Minister’s comments have now been backed by the Foreign Minister, Boris Johnson. Yet reports suggest quite the opposite. Why are Britain’s decision makers going against the clear findings?

Daoud Khairallah: Well, it has not been easy whether for Britain, or the US, or other countries that are providing Saudi Arabia and its allies with weapons. It has not been easy to resist the temptation of money and corruption in this sense. The fact is that we have a threat to the international community, to the whole world by terrorism, and the source of support of these terrorist organizations is well-known now. We know the role that Saudi Arabia is playing.

Add to this, when Saudi Arabia is involved in military operations, such as in Yemen, crimes of war and crimes against humanities have been committed. And the international community has not been sufficiently diligent to investigate and make accountable those responsible for it. Very few journalist and otherwise have the moral courage of speaking out. In the UK apparently some free minds are expressing concerns and rightly so. This is in response to what the whole human race now is concerned about.

RT: Theresa May rejected calls for the UK to halt arms sales to Saudi Arabia and stressed the value of close security co-operation with Riyadh. So do you believe the grounds for such a decision are good enough?

DK: The only explanation is the temptation of providing Saudi Arabia with weapons that are richly paid for by the Saudis. It is very difficult to find another explanation, another reasonable explanation. Humanity is not safer with more violence; it is not safer with encouraging extremist groups that are doing all over the Middle East now and expending throughout the world – things that are of real concern to the human race and those who still have some moral courage to speak about it.