China and the Philippines, traditionally the US’ closest ally in Southeast Asia, have reportedly discussed “revitalizing” bilateral ties in such key areas as tourism and customs, amid President Rodrigo Duterte’s recent harsh rhetoric for US officials.

China’s ambassador also said Beijing would like to invest in a number of infrastructure projects that have been launched by President Rodrigo Duterte’s administration, the newspaper reported on Monday, citing Philippines Finance Undersecretary Maria Editha Tan.

Manila’s accession to the Beijing-led Asian Infrastructure Investment Bank (AIIB), whose assets are said to amount to about half of the World Bank’s, was also reportedly discussed during the talks.

“The Chinese Ambassador expressed appreciation that the Philippines is taking steps to complete procedures in its membership with the AIIB,”Tan said.

Some media reports indicate that Beijing might be committed to restoring ties with Manila despite their unresolved territorial conflict. Speaking on the sidelines of the ASEAN summit in Laos, Chinese Deputy Foreign Minister Liu Zhenmin stressed that both countries share “thousands of years” of good relations.

“China has confidence that it can work with the Philippines to progressively improve our relationship,” he said, adding that relations with the new Duterte government appear to be very promising.

The remarkable news comes amid an escalating dispute between Manila and Beijing over the South China Sea. 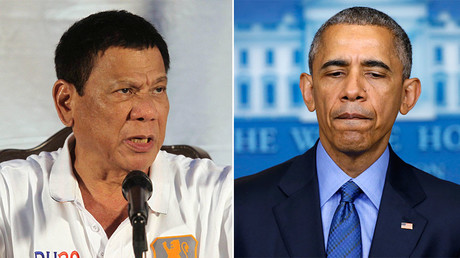 Philippines leader calls Obama ‘son of a b****,’ rejects lecturing from US on human rights

The Philippines’ Defense Ministry said on Sunday that intentions that China has been alleged to have to build an artificial island on the disputed Scarborough shoal was “cause for grave concern,” as they would disregard a ruling of the International Court of Justice that denied Chinese rights over the area.

In response, Beijing said it is the long-standing military alliance between the US and the Philippines that poses the greatest threat to security in the region.

“We do not make trouble, but we have no fear of trouble,” Admiral Sun Jianguo, the Deputy Chief of the Joint Staff Department of China’s Central Military Commission, said on Tuesday.

In the meantime, ties between Washington and Manila, traditionally the US’ closest regional ally, appear to be souring under current hardline President Duterte, who recently asserted that the Philippines has “long ceased to be a colony of the United States.”

“I do not have any master except the Filipino people, nobody but nobody,” he stressed.

Ahead of an Association of South East Asian Nations (ASEAN) meeting in Laos, Duterte added fuel to fire, telling US President Barack Obama: “Son of a b****, I will curse you in that forum.” Obama postponed his meeting with the Philippines leader after the tirade.

Both the US and the Philippines are signatories to several high-level agreements, such as the Mutual Defense Treaty and Enhanced Defense Cooperation Agreement, which allow Washington to rotate troops into the Philippines for extended stays.