Finian Cunningham (born 1963) has written extensively on international affairs, with articles published in several languages. Originally from Belfast, Ireland, he is a Master’s graduate in Agricultural Chemistry and worked as a scientific editor for the Royal Society of Chemistry, Cambridge, England, before pursuing a career in newspaper journalism. For over 20 years he worked as an editor and writer in major news media organizations, including The Mirror, Irish Times and Independent. Now a freelance journalist based in East Africa, his columns appear on RT, Sputnik, Strategic Culture Foundation and Press TV.

Marathon 10-hour talks this weekend between the US and Russia in Geneva failed to produce a comprehensive plan to end the brutal Syrian war.

Cutting through diplomatic jargon, the fundamental problem is that the US remains in denial about its criminal role in fueling the war.

It is this role by the US and various foreign allies in supporting illegally armed groups that ensures the continuance of the conflict, which has been running for nearly six years with hundreds of thousands killed. 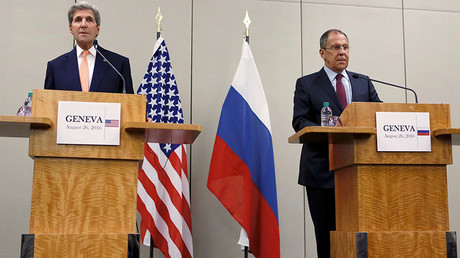 ‘US pretends there are moderates in Syria, Russia understands they are all terrorists’

Washington and its allies – in particular this week Turkey – claim to be fighting terrorism. But the myriad global networks of weapons, cash, oil smuggling and military intelligence all testify to systematic state sponsorship of terrorism in Syria – in spite of random apparent anti-terror operations by these same sponsor-states.

US Secretary of State John Kerry and Russian Foreign Minister Sergey Lavrov said they were continuing to work on details for a breakthrough to end the violence. These precise details were not revealed, but it is reported that American and Russian military and technical experts are liaising on resolving them.

Kerry and Lavrov have obviously good personal rapport, and there seems to be an earnest mutual respect between the diplomats to find a solution in Syria. But how can a solution be found when one of the parties is part of the problem? Not only that, but the guilty party is in utter denial about its nefarious role.

In this way, the discussions between Kerry and Lavrov are more resembling of the relationship between a patient and a therapist, in which Lavrov is having to painstakingly work through the details about which Kerry suffers cognitive dissonance.

Part of the logistical problem in implementing a ceasefire in Syria is the ongoing failure by the US to provide any distinction between terrorist groups and militia that it claims are “moderate rebels”.

That is a main factor for why the earlier ceasefire called in February fell apart. Syrian government forces and their Russian ally maintain that they have the legal right to continue attacking internationally recognized al Qaeda-linked terrorist brigades. For which Washington then turns around and accuses Syria and Russia of targeting “moderate” insurgents.

However, absurdly, Washington has not or cannot provide Russia with any maps or locations showing where its “moderate” militias are.

In a press conference with Lavrov in Geneva, Kerry ducked a question on how a modality could be found for making such a distinction. Kerry gave this tellingly vague response: “It is not a helpful situation, and we’re expressing concern about it with the Russians and working on ways to deal with it.”

In other words, Washington hasn’t a clue about any realistic distinction between the plethora of armed groups trying to topple the Syrian government.

That vacuity from Washington vindicates the Syrian and Russian assessment as essentially correct: the vast majority of the anti-government opposition are terrorist entities. They may have countless different names, but they share the same extremist ideology and methods; and ultimately they share the same sponsors among foreign states for weapons and funding. Chief among these sponsors is Washington, Britain and France, as well as Turkey, Saudi Arabia and other Gulf monarchies.

The Western media indulge in the same bankrupt, mendacious thinking by referring to “inter-mingling” between “moderates” and “extremists”. This is plainly a delusional narrative that has no bearing on reality in Syria. More than this it is a psychological operation of deception to conceal criminality of governments from their citizens.

The disclosure by former US intelligence chief Lt General Michael Flynn that the Obama administration was well aware from as early as 2012 that its covert support to anti-government militants in Syria was fomenting jihadist terrorism was a rare moment of honesty. Obama’s Secretary of State at that crucial time was Hillary Clinton. In that regard, Republican presidential candidate Donald Trump is right to say that Obama and Clinton “created” Islamic State and other related jihadist terrorist groups.

But Clinton’s successor John Kerry remains in apparent blissful denial of this systematic link between US foreign policy, regime change in Syria and the sponsorship of terrorism. Kerry arrogantly equivocates with diplomatic language about vague details for ending the conflict, without the slightest sign of shame over his nation’s culpability in fueling that conflict.

Associated Press quoted US officials who said that it is imperative that Russia pressures the Syrian government of President Bashar al Assad to concentrate its military attacks on Islamic State and the other main al Qaeda-linked organization, Al Nusra.

“For their part, US officials say they are willing to press rebel groups [sic] they support harder on separating themselves from the Islamic State and Al Nusra,” reported AP.

That sounds like the American side is prepared to give nothing but the same old empty procrastination over “un-mingling” of terror brigades. 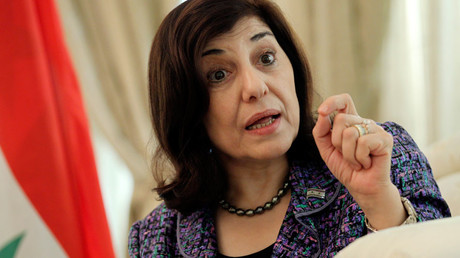 Nevertheless, there are indications that Lavrov’s “therapy” is succeeding in incrementally nursing the American side towards some truth acceptance.

Reuters reported on the latest Geneva encounter thus: “Assad’s future is not part of the current talks. Instead, discussions are focused on finding an effective and lasting solution to end the violence, which would open negotiations on a political transition in Syria.”

That “Assad’s future is not part of the current talks” is a significant concession by the Americans. No doubt, Washington still wants its prize of regime change – which is the original objective for inciting this war. However, it is notable that Kerry reportedly has now dropped the “Assad must go” mantra in his meetings with Lavrov.

Russia has consistently told the Americans that the issue of Syria’s president and government is a sovereign matter for the Syrian people alone. That is an inviolable legal principle underpinned by UN resolutions.

On that score, Washington appears, at last, to be overcoming its cognitive disconnect by finally shutting its mouth on illegal demands about the Syrian presidency.

Now the next phase of diplomatic “therapy” from Lavrov will need to coax his American patient into coming to terms with the truth of its complicity in terrorism. The causal connections between policy makers in the Obama administration and CIA weapons supply to terrorist clients are documented and disclosed, as in the case of Lt General Flynn.

What is needed is for people like John Kerry and other Western government leaders to stop living in denial and to realize the truth: They are part of Syria’s problem, not the solution.

And their problem stems from criminal covert support to terrorist proxy armies in their equally criminal intrigues for regime change in Syria.

Without this systematic accountability for Washington and its various allies over the conflict in Syria, all diplomatic talk about “ending the violence” is just futile nonsense.

The ceasefire first announced six months failed because of this Western mentality of denial and deception. There is no reason to think that new efforts for another ceasefire will somehow succeed.

Because the delusional minds of the terror sponsors so far seems to be beyond any form of remedial influence – despite the best efforts of Russia’s top diplomat Sergey Lavrov.

A good dose of Western public anger demanding prosecutions for war crimes might help provide some remedy though, and bring an end to Syria’s torment.