Loss of crucial Al Tabqah corridor would leave a huge swathe of ISIS territory on the right bank of the Euphrates without a road connection to the rest of ISIS’ statelet.

Since direct Russian military intervention in Syria begun in September 2015 expressed in terms of area size Damascus government has not been able to re-capture much of Syria’s territory. However, the ground that it has recaptured has been in key sectors so that the value of the gains has been considerably greater that its acreage might imply.

Firstly, it recaptured territory in Latakia on the approaches of Syria’s Alawite coast – thus giving the region and the community that has bled disproportionately in the Syrian armed forces some breathing space and alleviated the sense of crisis and siege. This allows at least Syria’s Alawite soldiers and officers fighting on other fronts to do so in the knowledge that their families and villages back home are relatively safe.

Secondly, it made sufficient gains around Aleppo as to cut off the crucial Azaz corridor that served as the rebels’ main bloodline from Turkey. This has also allowed the Kurds’ of Afrin enclave to make gains of their own. Indeed, backed up by Russian airstrikes, they look set on mopping up the remnants of the Azaz corridor by pocketing up Tal Rifat and Azaz.

Recently, however, while all eyes have been on Aleppo, Syria army has also made gains in the eastern direction taking ground from ISIS. A number of commentators have noted the new gains are in the direction of ISIS’ headquarters in Raqqah, and it well may be that this is the final goal of the efforts.

However, it should be noted that loyalist forces do not actually have to reach Raqqah to score a major victory. That connection leads through a narrow corridor south of Lake Assad that at its thinnest is less than 15 kilometres wide. If the Syrian army can cover those 15 kilometres and reach the beaches of the lake at Al Tabqah (also Al-Thawrah) then even that last connection will be lost.

In that situation the only remaining way for ISIS to move back and forth would be across Lake Assad itself which is certainly possible to do – but it’s safe to say that if that happened on any meaningful scale the Russian air force in Syria would have a turkey shoot.

Of course, there is no guarantee that Syrian army can perform this feat any time soon – in some cases 15 kilometres may as well be a thousand.

However, if the trend where the Syrian army makes only small territorial gains but makes them where they count the most then the situation around Al Tabqah to the south of Lake Assad may be the one to keep an eye on. 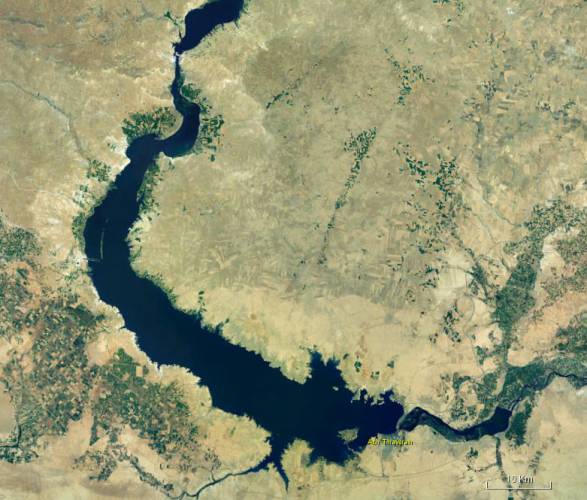 The mighty lake as seen from space