Syria (SCF) – The US-led NATO alliance is dispatching warships to the Mediterranean to allegedly help ease Europe’s refugee crisis. However, a closer look at the naval vessels in the NATO mission shows that this is no refugee rescue attempt – but rather a full-on war mobilization.

The timing comes just as US-Russian diplomatic talks on the Syrian crisis reach a make-or-break moment, suggesting that NATO is preparing military action in league with Turkey in order to salvage the covert war for regime change in Syria.

That war has seen rapidly mounting losses for the United States and its allies who have been fueling clandestine proxy militias to topple the Assad government since March 2011. Those losses have escalated since Russia began its aerial bombing campaign four months ago to help stabilize the allied Syrian state of President Bashar al-Assad.

After a meeting with NATO ministers in Brussels on Thursday, the alliance’s Secretary-General Jens Stoltenberg announced that “without delay” the Standing Maritime Group 2 would be dispatched and

will be tasked to conduct reconnaissance, monitoring and surveillance of the illegal [refugee smuggling] crossings in the Aegean Sea in cooperation with relevant authorities.

Significantly, in addition to the Aegean Sea crossing, the NATO mission will be tasked with monitoring the Syrian-Turkey border, again allegedly to combat human trafficking of refugees. That purported surveillance implies that the NATO vessels will be operating in the East Mediterranean, near Cyprus, where the Standing Maritime Group 2 is normally based.

“Mr Stoltenberg said reconnaissance and intelligence gathering was also being stepped up at the Turkey-Syria border“, according to the BBC.

The mobilization has been ordered by NATO Supreme Commander General Philip Breedlove. Breedlove has distinguished himself previously for his rabid Cold War-style rhetoric against Russia. His new role, ostensibly, as a concerned humanitarian does not seem fitting.

Breedlove is quoted by the NY Times as saying:

This mission has literally come together in the last 20 hours, and I have been tasked now to go back and define the mission. We had some very rapid decision making and now we have to go out to do some military work.

The NATO military commander appears to be dissembling. Last week, NATO reported that the Standing Maritime Group 2 had just completed “extensive” training operations with the Turkish navy in the East Mediterranean, according to the alliance’s own website.

The same group of vessels are now being sent allegedly on a «refugee rescue» mission. It beggars belief that General Breedlove, the top NATO military planner, claims that “this has literally come together in the last 20 hours”.

Comprising the NATO Standing Maritime Group 2 are three ships: FGS Bonn (Germany), HMCS Fredericton (Canada) and a Turkish Barbaros vessel. These are heavy-duty warships, bigger than destroyer class, each bristling with an array of weaponry, including anti-aircraft, anti-ship, anti-submarine and anti-missile firepower.

When the NATO naval group – which is described as a “rapid reaction force” – conducted its exercises last week in the East Mediterranean, the maneuvers included drills with Turkish F-16 fighter jets and corvettes.

Britain’s Independent newspaper cites NATO’s secretary-general Stoltenberg as saying that the naval mission will involve five ships and that more vessels may be included.

The extent to which the NATO vessels will interact with refugee boats remains unclear. NATO diplomats said that rather than direct intervention, intelligence gathered about people-smugglers is likely to be handed over to Turkish coastguards to allow them to combat the traffickers more effectively.

Stoltenberg said that the objective was “not about stopping or pushing back refugee boats” but about contributing “critical information and surveillance to help counter human trafficking and criminal networks“.

If NATO ships are not there to interact with refugee vessels, then what are they for?

The notion that heavy-duty warships are sent to tackle human trafficking gangs is also not plausible. The traffickers rarely make the crossing on the overcrowded boats with the refugees. After the extortionate fees are handed over on Turkish shores, the boats are pushed out to sea by the traffickers who then disappear inland.

US Secretary of Defense Ash Carter was also attending the NATO meeting in Brussels. He said of the new putative rescue mission:

There is now a criminal syndicate that is exploiting these poor people and this is an organized smuggling operation. Targeting that is the way that the greatest effect can be had… That is the principal intent of this.

The apparent humanitarian intentions of this NATO mission lack credibility. As the BBC noted:

The question is: why now? Last year, more than 3,000 people perished in Mediterranean crossings and up to one million entered the EU. So, why is NATO suddenly finding a sense of urgency now in allegedly tackling Europe’s refugee problem? It doesn’t add up.

More glaringly incongruous is the vast mismatch in vessel types and the supposed humanitarian naval purpose. The Standing Maritime Group 2 is a war operation, not a coastguard formation.

Another clue is that the mission has been initiated by NATO members Germany and Turkey. Earlier this week, German Chancellor Angela Merkel was in Turkey where she publicly backed President Recep Tayyip Erdogan’s calls for Russia to halt its military operations in Syria. Merkel iterated the NATO propaganda line that Russian bombing has “inflicted civilian suffering” and is responsible for the latest surge in people fleeing the Syrian city of Aleppo to Turkey’s border.

Russia’s successful military support for Syrian government forces has enabled dramatic strategic gains against the anti-government militia, most of whom are al-Qaeda-linked foreign terror brigades who have been infiltrated and weaponized by the US and its NATO allies, including Turkey and regional partners Saudi Arabia and Qatar. 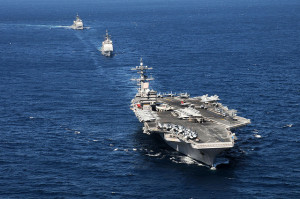 In a separate report this week, the New York Times disclosed that Washington and its allies are under increasing pressure from Russia’s military success in Syria. In a startling admission the NY Times reported:

The Russians have cut off many of the pathways the CIA has been using for the not-very-secret effort to arm rebel [read “terror”] groups, according to current and former [US] officials.

Losing the covert war in Syria because of Russia’s intervention, Washington is thus considering “Plan B”, added the NY Times, which means “a far larger military effort directed at Assad“.

The losing dynamic of the US-led covert war in Syria also explains why frustrations between Washington, Turkey and Saudi Arabia are bursting into the public sphere, with Erdogan in particular rebuking the Americans in speeches this week.

The deployment of NATO warships to the Mediterranean under the cover of “stemming Europe’s refugee crisis” may be a sop from Washington to Turkey to feign a more muscular response to the covert military losses in Syria, and thereby shut Erdogan up for a bit.

There again, it could be a sign of the adverted Plan B, and a real military contingency toward more direct US-led NATO intervention in Syria.

This report prepared by Finian CUNNINGHAM for Strategic Culture Foundation.