Washington and London are all-out to demonize Russian leader Vladimir Putin. Only days after a British judge insinuated that Putin had ordered the murder of a former Russian intelligence agent, the BBC and the American Treasury Department were accusing the Russian president of financial corruption. Meanwhile, in the world of hard facts Washington and London are guilty of state terrorism involving the murder of millions of innocent people. We may marvel at the discrepancy. It’s called brainwashing.

Enough has already been written about the death of Alexander Litvinenko in London 10 years ago to dispel official British claims that the incident had anything to do with Vladimir Putin or anyone else at the Kremlin. Yet the risibly flimsy nature of the so-called British public inquiry did not stop British premier David Cameron mouthing condemnations against Russia.

That feeble propaganda stunt failed to gain any credibility, so this week the state-owned BBC aired a program that «reveals» how the Russian leader is, allegedly, an embezzling tycoon. The BBC features the US Treasury «confirming» allegations that Putin has become a multi-millionaire through corruption, which, we are told, Washington has known about for «many, many years».

As with the so-called Litvinenko inquiry, the latest corruption «revelations» from the BBC are presented without the slightest proof. The central bit of «evidence» are claims by the BBC that Putin got rich in part from the gifting of a luxury yacht from London-based Russian business magnate Roman Abramovich. Talk about tenuous tale-spinning. And, to boot, Abramovich is quoted by the BBC as dismissing its own threadbare claims as ridiculous.

The Kremlin barely responded to any of these claims, and is right not to dignify them by making formal denials. Russia’s foreign ministry rebuffed the Litvinenko speculation as a «bad joke» while on the corruption claim Putin’s spokesman rubbished it as «fiction».

Nevertheless, it is a disturbing sign of egregious discourtesy to diplomatic norms that Washington and London are openly throwing such slander at the Russian president. It shows a complete breakdown in respect for international law, sovereignty and scruples; not that Washington or London had much scruples to begin with.

The astounding irony of all this is that while the American and British authorities are indulged in their baseless allegations against Putin with copious coverage in the Western mainstream media the facts are glaring that both these governments are inculpated by systematic support for international terrorism.

Leave aside, for a moment, the illegal wars, regime-change operations and drone assassinations in Afghanistan, Iraq, Honduras, Libya, Syria, Palestine, Ukraine, Pakistan and Somalia since US President Barack Obama was elected in 2008 – which have resulted in millions of innocent lives being destroyed. 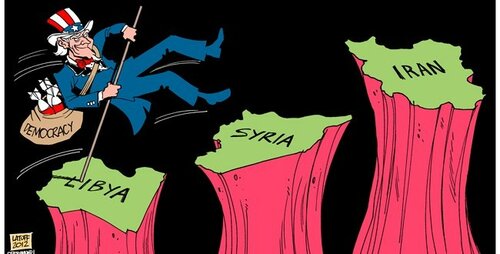 Let’s just focus on the events and statements over the past week alone which indict both Washington and London in outrageous war crimes.

Last week, while on a tour of Europe, the US defense secretary Ashton Carter called for more military intervention in Iraq and Syria – supposedly to fight against terrorism. Carter said this in the company of other NATO counterparts, including those of Britain and France. The Pentagon chief also went on to admit that hundreds of US commandos are already active in Syria and Iraq.

In Carter’s own glib words, the American government has just self-incriminated. As respected international war crimes lawyer Christopher Black said to this author: «In calling for military intervention in sovereign countries, no matter what the alleged purpose is, what Carter and his NATO allies are doing is criminal. They are in effect engaging in aggression which is the most serious violation of international law».

The lawyer added: «The International Criminal Court in The Hague should be issuing indictments for this latest act of aggression by Washington and its allies towards countries in the Middle East. Of course, the ICC is a political instrument of the Western powers. Nonetheless, the legal case is that Washington is in serious breach of international law from its declaration for increasing military action in Syria and Iraq».

Washington’s deluded notion of exceptional impunity was further amplified when Vice President Joe Biden hours later announced that the US was prepared to take military action in Syria if the current Geneva political negotiations turned out a failure. (By «failure» Biden means failure to achieve regime change via political means.) Biden was speaking during a visit to Turkey where he heaped praise on the Ankara regime as a fellow NATO ally even while Turkish troops have killed hundreds of Kurds in recent weeks as well as invading Iraqi and Syrian territory.

The Turkish incursion of Syria near the northern town of Jarabulus appears to be in conjunction with reports last week of American troop takeover of an airfield at Rmeilan in Syria’s northeast Hasakah Province. Therefore, Biden is not just endorsing illegal aggression by an ally; Washington is colluding in this aggression.

In a related vein, the top US military officer, Marine Corps General Joseph F Dunford Jr, the Chairman of the Joint Chiefs of Staff, was also out and about in Europe last week, where he told reporters in Paris that Washington and its NATO allies were planning military action in Libya «within weeks». There is no functioning government in Libya to even give this planned intervention a fig leaf of legal cover. Remember the US and its NATO allies destroyed the Libyan government when they bombed the North African country for seven months in 2011, resulting in the murder of its leader Muammar Gaddafi and the usurpation of Libya by extremist militias related to the so-called Islamic State (IS) terror network.

The IS network, like al-Qaeda and the Mujahideen in Central Asia and the Russian Caucasus, the Contra in Central America and Gladio terrorists in Europe, among many others, is a creation of Western intelligence: the American CIA and British MI6, along with other governmental terrorist-sponsoring agencies in France, Saudi Arabia, Qatar, Turkey and Israel.

Washington’s systematic relationship with terrorism was revealed this week in the debacle over the Geneva so-called peace talks on Syria. The talks missed their start date on January 25, and were re-scheduled for later this week. The US and Saudi-backed «opposition» groups are threatening to snub dialogue with the Syrian government. Why? Because the Syrian government and its Russian ally are saying that terrorist groups are not admissible to the negotiating table. Again self-incriminatingly, Washington, along with the Saudi regime, wants to include in the opposition side two groups that are directly implicated as subsidiaries of the IS and al-Qaeda terrorist franchises. They are Jaish al-Islam and Ahrar ash-Sham. Both share fighters, American weapons, Saudi financing and Saudi Wahhabi ideology with the officially listed terrorist groups. Yet Washington wants to have these same groups participate in shaping the political future of Syria.

On Monday – the same day that the Geneva talks were slated to begin – Washington’s presumably «moderate rebels» in Ahrar ash-Sham carried out a no-warning car bombing in the Syrian northern city of Aleppo, killing 23 civilians.

US top diplomat John Kerry was in Riyadh two days before the Geneva talks were scheduled in order to give his imprimatur to the Saudi-backed and self-appointed High Negotiating Committee. This committee excludes any peaceful, political Syrian opposition groups who want to sit down to thrash out reforms with the government of Syrian President Bashar al-Assad. Instead the US, Saudi-backed exiled committee insists that the terrorist militia of Jaish al-Islam and Ahrar ash-Sham (both in reality shell fronts for IS and al-Qaeda) must be the sole «opposition» in the Geneva talks.

What’s more the terrorist «opposition» are stipulating that if the Syrian and Russian armed forces do not stop their military campaigns immediately then they will not participate in the Geneva talks. In other words, Washington is using diplomacy and politics in an utterly cynical way to pursue regime change because it has lost the criminal covert war it launched in Syria nearly five years ago – a war that has resulted in a quarter million deaths and millions more wounded and made homeless.

The criminality does not stop there. While in Riyadh last weekend, US secretary of state John Kerry also reiterated Washington’s support for the Saudi-led military coalition that has been bombing Yemen non-stop for the past 10 months. Kerry repeated Saudi lies justifying its military aggression in Yemen that has resulted in nearly 8,000 deaths. Both Washington and London have supplied warplanes, missiles and logistics for the Saudi slaughter in the Arab world’s poorest country. Not even hospitals and family homes have been spared in the war of aggression on Yemen, where up to 80 per cent of the 24 million total population are being starved of food, water, fuel and medicines owing to a US, British, Saudi military blockade on the entire country. Last week, nine dockworkers were killed in a Saudi air strike on the Red Sea port terminal at Ras Isa, near Hodeida.

The crimes of Washington and London are legion, provable and ongoing. And that is apparent in only a narrow time frame over the past week. Extend that by weeks, months, years and decades and we are talking about systematic war crimes involving millions of deaths.

Yet these two state-terrorist regimes have the audacity to make a song and dance with slanderous allegations against Russia’s Vladimir Putin based on their own mischievous lies.

How do they get away with such phenomenal distortion? That’s where the goldfish-bowl, brainwashing Western mainstream media rise to the occasion. They are equally complicit in criminality for the lies and omissions they relay on behalf of their masters.

But, alas, the decades-long brainwashing spell is waning. Western people are gradually waking up and beginning to see through the arrant nonsense implanted by their rulers. When that happens in full, the people will come after those real culprits, the ones in fancy suits and polished corporate-government offices.

So let them slander Putin and whoever. The more slander, the more self-incrimination for their own eventual day of judgement.