The UK stands accused of joining Saudi Arabia’s military campaign against Houthi rebels in Yemen. Six British experts are helping their Saudi colleagues target areas for attacks, according to Sky News. The Ministry of Defence has denied the allegations.

Britain is well known for supplying the Saudi regime with billions of dollars worth of military hardware. However, it now appears the UK is helping the kingdom to use these weapons on the battlefield.

The experts are believed to be helping Saudi forces coordinate attacks against the Houthi rebels in Yemen. However, the Ministry of Defence (MoD) says no British military personnel are taking part in direct operations, but are merely helping to train the Saudis to make sure they comply with international law.

The claims have brought a stinging response from human rights groups, who say they have documented dozens of examples of the Saudi-led coalition committing breaches of international law.

“At a time when the Saudis and other members of the Gulf coalition are committing multiple violations of the laws of war in Yemen – we’ve documented that,” said David Mepham, the director of Human Rights Watch UK, as cited by Sky News.

“Human Rights Watch has put out numerous reports about what the Saudis are up to in Yemen – that the British are working hand in glove with the Saudis, helping them, enhancing their capacity to prosecute this war that has led to the death of so many civilians. I think it’s deeply regrettable and unacceptable,” he added.

The claims will come as further embarrassment to the UK with the government coming under pressure to loosen ties with Riyadh. Prime Minister David Cameron postponed a tour of the Gulf States, including Saudi Arabia this week, after public outrage following the country’s decision to execute 47 people, long-time dissenter and prominent Shiite cleric Sheikh Nimr al-Nimr among them.

News of the postponement came as it was revealed that Saudi Arabia was the only country omitted from the UK’s international anti-death penalty policy document.

The omission was found by the Independent in a 2011 Foreign Office document, which set out a five-year strategy for dealing with capital punishment around the world.

Countries named include Barbados and Jordan, which execute about 10 prisoners a year, but the document failed to mention close ally and UK arms trade customer Saudi Arabia, which carried out at least 158 executions in 2015, with beheadings reaching their highest level in two decades, according to human rights groups.

Reprieve death penalty team director Maya Foa told the Independent: “Saudi Arabia has consistently ranked in the world’s top five executioners, and a large proportion of beheadings carried out in the country have been for non-violent offences, including protest.” 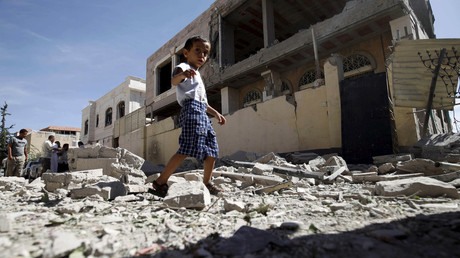 The UK spends £55 million ($80 million) on aid to Yemen every year. However, Cameron’s government has been criticized for continuing to sell weapons to Saudi Arabia during the conflict, in which some 6,000 people have been killed

“The Yemenis are being pulverized by the Saudis while we try to get aid in through ports, which are being blockaded and while British ordnance is being dropped there.”

A recent report by the Campaign Against Arms Trade (CAAT) found the UK has received £5.6 billion ($8.19 billion) for arms deals with Saudi Arabia, since Cameron became prime minister. In December, the rights group pledged to pursue legal action against the government in response to arms sales to the kingdom.

“UK fighter jets and UK bombs have been central to the humanitarian catastrophe being unleashed on the people of Yemen. Thousands have died and essential infrastructure, including hospitals, has been destroyed,” Andrew Smith of CAAT said on the organization’s website.

“The UK has continued to support airstrikes and provide arms, despite strong evidence that war crimes are being committed. The Saudi regime has an appalling human rights record at home and abroad, and these arms sales should never have been approved in the first place,” he added.

A recent study by Opinium LLP for CAAT found that 62 percent of UK adults oppose arms sales to Saudi Arabia, with only 16 percent supporting them.

On January 2, Saudi Arabia ended a ceasefire in Yemen, which had lasted just over two weeks after being implemented in mid-December. Riyadh complained that rockets were being fired by Houthi rebels towards Saudi cities.

The Saudi-led campaign in Yemen, which started in March, has been slammed by human rights organizations, while the UN said on December 23 that the kingdom should do more to try and implement the ceasefire.

“A failure to act decisively does not only spell misery for the millions of vulnerable people in Yemen today. It would inevitably push the country into an irreversible process of Balkanization, the consequences of which would lie outside of anyone’s control,” the UN High Commissioner for Human Rights Zeid Ra’ad Al Hussei said.