Leonardo DiCaprio has launched a ferocious attack on the greed of the world’s energy industry at the World Economic Forum in Davos.

DiCaprio used an awards ceremony to demand more action on climate change, decrying those who deny it is a problem. And he insisted fossil fuels must be kept in the ground – backing a campaign launched by the Guardian last year.

After picking up a crystal award for his work on environmentalism, the actor explained he had seen the devastation caused by climate change firsthand, from melting glaciers in the Arctic to farmers whose crops had been washed away.

DiCaprio is tipped for Oscar success this year for his role in the bleak and gritty drama The Revenant. And he gave energy bosses a similar savaging.

We simply cannot afford to allow the corporate greed of the coal, oil and gas industries to determine the future of humanity. Those entities with a financial interest in preserving this destructive system have denied, and even covered up the evidence of our changing climate.

Enough is enough. You know better. The world knows better. History will place the blame for this devastation squarely at their feet.”

The solution to limiting global warming, he added, is to leave oil, gas and coal reserves alone:

Our planet cannot be saved unless we leave fossil fuels in the ground where they belong. Twenty years ago, we described this problem as an addiction. Today, we possess the means to end this reliance.”

DiCaprio also announced that his foundation was making $15m of fresh grants to support environmental protection. That includes funding to protect 6.5 million acres of rainforest on Sumatra from the “invasive and destructive practices” of the palm oil industry. 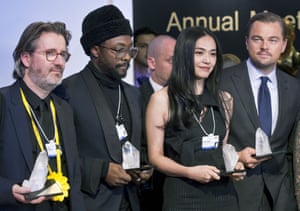 DiCaprio was one of four winners of a Crystal award at WEF this year. The fund also recognised Chinese actor Yao Chen for her work raising public awareness of the refugee, artist Olafur Eliasson, and musician will.i.am for his i.am angel Foundation, which tries to keep young underprivileged young people in education, and out of trouble.

Accepting his award, will.i.am joked he had grown up near gangs, but had kept out of them as he was more scared of his mother than the gang leaders. His dream is that a child in one of America’s poorest regions could become the next tech pioneer.