Shinzo Abe made the remarks at his new year press conference

Japan’s Prime Minister Shinzo Abe has called for talks with Russia’s President Vladimir Putin so that the two countries can negotiate a peace treaty.

The two never signed a treaty after the end of World War Two because of a dispute over four islands.

Mr Abe told reporters that both leaders recognised that the lack of such a document for 70 years was “abnormal”.

Since taking office in 2012 Mr Abe has tried to improve relations with Moscow.

The former Soviet Union had seized several islands which Japan calls its Northern Territories in 1945. Russia calls them the Southern Kurils.

The two leaders last discussed the issue in 2013. 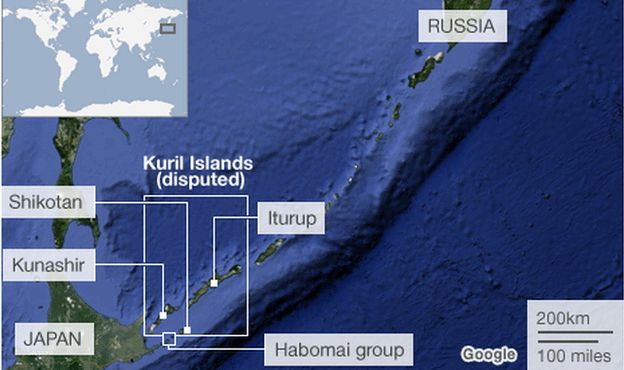 Read more: The island dispute between Russia and Japan

Mr Abe told reporters at his New Year press conference in Tokyo that he and Mr Putin “share the view that it is abnormal” for their countries not to have a peace treaty. The two countries established diplomatic relations in 1956.

“But without a summit meeting this Northern Territories problem cannot be resolved,” he said.

He added that he would continue discussions with Mr Putin “when opportunities arise”.

The disputed island chain stretches north across the Pacific Ocean from the Japanese island of Hokkaido to the southern tip of Russia’s Kamchatka Peninsula.