Indian Prime Minister (PM) Narendra Modi arrived to Moscow on Dec.23 for a two-day visit as part of the 16th Annual Bilateral Summit. Russian President Vladimir Putin and the Indian PM proclaimed the partnership between their two countries as they signed a clutch of defence, energy and other deals – totally 16 agreements worth $7 billion, including a plan to simplify the visa regime between their two countries. President Putin told a joint briefing that Russia supported India’s bid for permanent membership of the United Nations Security Council.

«As I look to the future, I see Russia as a significant partner in India’s economic transformation and in shaping a balanced, inclusive and a multi-polar world», PM Modi told reporters.

The Indian leader emphasized his personal relationship with President Putin and support for the Russian leader’s positions. «Despite the various global problems, despite the confrontation against Russia, you have raised your country, your state to a qualitatively new level», he said. 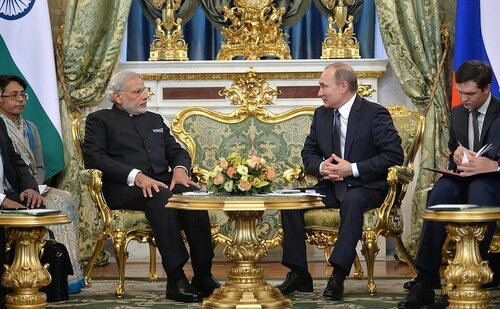 Ways to expand economic cooperation between the two countries were explored aiming to increase the current bilateral annual trade of $10 billion to $30 billion in the next 10 years. The Indian Prime Minister indicated that he sees Russia as one of India’s most reliable friends, and has made clear that he wishes to revive and deepen the strategic ties, especially in areas such as nuclear power and defence.

Deals signed between the two countries include:

– joint co-operation in exploration and production of hydrocarbons in Russia

India’s Reliance Defense said on Dec.24 it had signed a manufacturing and maintenance deal potentially worth $6 billion with Russia’s Almaz-Antey, the producer of an air defense system the Indian military made a decision to buy. A few days before that, the Indian Defense Ministry said the government had cleared the purchase of five S-400 air defense systems estimated to cost about $4.5 billion. Reliance is forging close ties with Russia to jumpstart its ambitions to develop a defense business from scratch. It has discussed joint implementation of modernization, repair and overhaul of Almaz-Antey systems already in service in the country’s inventory. Negotiations are apparently on for India to seal the deal on the lease of another Akula II class nuclear submarine, an order for three more Krivak III class stealth frigates, and the Fifth Generation Fighter Aircraft (FGFA).

70 percent of the Indian military uses Russian hardware and Delhi relies on Moscow to supply spare parts and other services.

Russia’s vast hydrocarbon reserves are of great interest to India and the two countries are cooperating on exploring the Russian offshore Arctic. More immediately, the International North-South Trade Corridor (INSTC) and the construction of gas pipelines from Russia and Central Asia to Chabahar are also of great importance for other states en route. 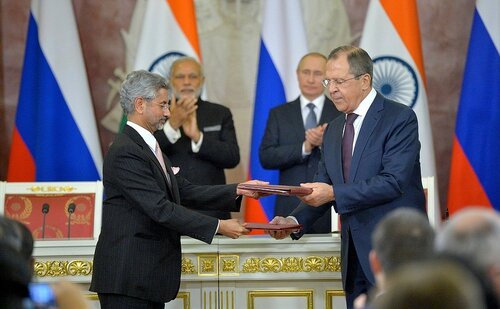 Russian state-run Rosneft and India’s Oil & Natural Gas Corp. (ONGC) signed a memorandum of understanding on joint exploration and production at oil and gas fields in Russia, including offshore projects. They also agreed that ONGC may increase its stake in the Rosneft subsidiary Vankorneft after already buying 15 percent, and Rosneft and Oil India signed an accord on possible onshore projects in Russia.

Rosatom, a state-run nuclear power operator, agreed on assembling Russia-designed products for nuclear power plants in India. Russia would help build at least six more 1,200-megawatt capacity power units in the southern state of Andhra Pradesh during the next 20 years. Those will be in addition to the six Russia is constructing in neighboring Tamil Nadu state.

Indian investment in Russia now totals $7 billion and comes mainly from the oil and gas sector. ONGC-Videsh has a 20 percent stake in Sakhalin-1 and acquired Imperial Energy Tomsk, which has oil-producing assets. Russia’s Gazprom and GAIL signed a 20-year contract to supply LNG. And Rosneft has tied up with Essar for long-term supply of crude oil and feed stocks. Meanwhile, Tata has plans to set up an assembly line for mini lorries and buses. In pharmaceuticals, the Sun Group, Ranbaxy and Lupin are expanding their operations in Russia. There is tremendous potential in diamond, fertilizers and food sectors that needs to be exploited by India Inc.

Russia too needs to step up its investments in India which currently stands around $3 billion. Major opportunities are opening up for Russian companies in India to invest in Modi’s ‘Make in India’ initiative in sectors such as defence equipment, civil aviation and in railways.

With Western sanctions against Russia in force and relationship with Turkey worsened, Indian corporations face lucrative prospects as they move into the space vacated by EU and Turkish firms in pharmaceuticals, agriculture, food products, fertilizers, textiles, furniture, and other areas. Russia can be a major market for Indian industry such as pharmaceuticals, manufactured goods, dairy products, bovine meat and frozen seafood. The forthcoming Transatlantic Trade and Investment Partnership driven by the US will boost the Russia-India trade.

Delhi needs Russia because it can meet its abundant energy requirements at a cost-effective price. India needs to collaborate with Russia to master future technology including space programs. It improves India’s bargaining power when it negotiates arms sales with the West.

The importance of Russia to India is far greater than a few arms sales or energy contracts, no matter how large-scale they are. Russia possesses significant diplomatic clout, an advanced military-industrial technological complex, large deposits of natural resources, and a strong military. It has used its veto power in the UNSC on such thorny issues for Delhi as Kashmir. Geopolitically, Russia continues to be a balancing force against any designs other countries may have in our region.

Both India and Russia have common interests in the stability of the Middle East. Russia’s historic ties and influence in Central Asia can be a mutually beneficial asset.

The both countries face a growing threat coming from Afghanistan where options seem to be running out. With TAPI (The Turkmenistan–Afghanistan–Pakistan–India gas pipeline) just having received a fresh impetus (Turkmenistan has launched the construction). If implemented, the project will meet India’s 25 percent needs of natural gas.

India would always want Central Asia to be stable. That’s where Russia’s and India’s interests meet. It’s not a coincidence that the Indian Prime Minister went to Afghanistan right after Moscow to offer the country lethal weapons (Mi-25 attack helicopters) as gratuitous military aid.

It all makes the relationship a win-win project. The parties’ national and international ambitions are mutually supportive – there are no serious contradictions to complicate the mutual ties.