Ergün Poyraz (below), in his 2007 book Children of Moses, wrote that Turkey’ Recep Tayyip Erdoğan, and his wife, are crypto-Jews, who secretly work with Israeli intelligence.

Poyraz’s book that put him in Prison – ‘Children of Moses’

In 2007, Poyraz was arrested and eventually sentenced to 29 years in prison.Poyraz claims that Erdoğan came to power as part of a Zionist conspiracy devised by Turkey’s JİTEM, a secret government intelligence unit.
JİTEM is believed to be behind many bombings, attacks and assassinations, and is believed to be linked to Ergenekon, which was part of the CIA’s Operation Gladio.

Above, we see the American Jewish Congress handing to Erdogan a Jewish ‘profiles of courage award’.

According to Ergün Poyraz, Erdogan has spoken to the Jewish Anti-Defamation League and the American Jewish Committee.

Turkey has a large crypto-Jewish population.

Erdogan with his Jewish classmate Rafael Sadi. They studied economics together.As Turkey’s prime minister, Erdogan helped Israel and its friends carry out the Arab Spring.
Erdogan has helped the Israel in its attacks on Syria and Iraq.

Turkey’s military, whose wiretapping equipment is used by Israel to spy on Turks. Website for this image
Erdogan supported Israel becoming a member of the OECD, the Organization for Economic Cooperation and Development.Erdogan’s government has made multi-billion dollar defense contracts with Israeli firms. 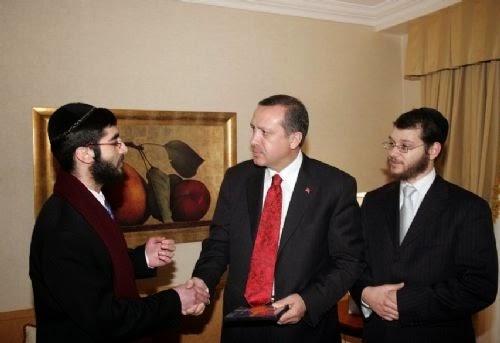 Necmettin Erbakan, a former Prime Minister of Turkey, claims that Erdogan’s tough line on Israel is a façade to deceive the Turkish public.

“Why on earth did Erdogan’s AK Party give a ‘go ahead’ to the membership of Israel in the Organization for Economic Cooperation and Development (OECD) and not block membership?

“Why did the Turkish government consent to multi-billion dollars worth of defense contracts with Israeli firms?

“Erdogan says ‘one-minute’ to Peres during Davos but conducts business as usual with the Jewish state. This is hypocrisy.”

HOW THE ILLUMINATI TERRORIZE & CONTROL TURKEY