As US attempts to extort a settlement in Syria built on regime-change, US senators and generals conspire to arm and back a new terrorist army aimed at Iran.

An October 7, 2015 hearing before the US Senate Committee on Armed Forces (SASC) titled, “Iranian Influence in Iraq and the Case of Camp Liberty,” served as a reaffirmation of America’s commitment to back the terrorist organization Mujahedeen e-Khalq (MEK) and specifically 2,400 members of the organization being harbored on a former US military base in Iraq. 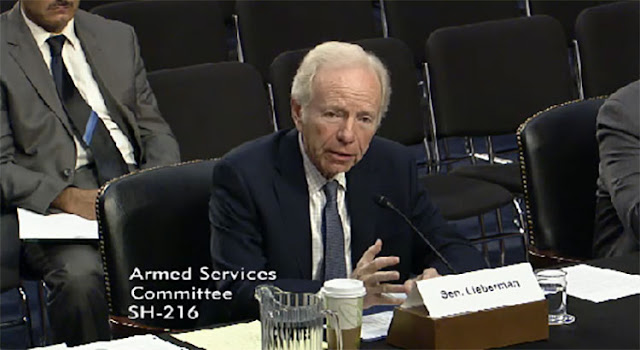 All three witnesses made passionate pleas before a room full of nodding senators for America to continue backing not only MEK terrorists currently harbored on a former US military base in Iraq, but to back groups like MEK inside of Iran itself to threaten the very survival of the government in Tehran.

In the opening remarks by Lieberman, he stated:

It was not only right and just that we took them off the foreign terrorist organization list, but the truth is now that we ought to be supportive of them and others in opposition to the government in Iran more than we have been.

Here’s my point Mr. Chairman, we ought to compartmentalize that agreement also, that nuclear agreement. We ought to put it over there, and not let it stop us from confronting what they’re doing in Syria. Continuing the sanctions for human rights violations in Iran in support of terrorism. And here’s the point I want to make about the National Council of Resistance of Iran and other democratic opposition groups that are Iranian – we ought to be supporting them.

This regime in Tehran is hopeless. It’s not going to change. There’s no evidence … every piece of evidence says the contrary. So I hope we can find a way, we used to do this not so long ago, supporting opposition groups in Iran. They deserve our support, and actually they would constitute a form of pressure on the government in Tehran that would unsettle them as much as anything else we could do because it would threaten the survival of the regime which from every objective indicator I can see is a very unpopular regime in Iran.

The United States, unrepentant regarding the arc of chaos, mass murder, terrorism, civilizational destruction it has created stretching from Libya to Syria, now seeks openly to extend it further into Iran using precisely the same tactics – the use of terrorist proxies – to dismantle and destroy Iranian society.

While Lieberman, General Jones, and Colonel Martin all failed categorically to accurately describe the true nature of the MEK terrorists they seek to support in a proxy war with Iran, the US policy papers these three lobbyists are reading from have done so and in great detail.

MEK is a Listed Terror Organization for a Reason

MEK has carried out decades of brutal terrorist attacks, assassinations, and espionage against the Iranian government and its people, as well as targeting Americans including the attempted kidnapping of US Ambassador Douglas MacArthur II, the attempted assassination of USAF Brigadier General Harold Price, the successful assassination of Lieutenant Colonel Louis Lee Hawkins, the double assassinations ofColonel Paul Shaffer and Lieutenant Colonel Jack Turner, and the successful ambush and killing of American Rockwell International employees William Cottrell, Donald Smith, and Robert Krongard.

Admissions to the deaths of the Rockwell International employees can be found within a report written by former US State Department and Department of Defense official Lincoln Bloomfield Jr. on behalf of the lobbying firm Akin Gump in an attempt to dismiss concerns over MEK’s violent past and how it connects to its current campaign of armed terror – a testament to the depths of depravity from which Washington and London lobbyists operate.

To this day MEK terrorists have been carrying out attacks inside of Iran killing political opponents, attacking civilian targets, as well as carrying out the US-Israeli program of targeting and assassinating Iranian scientists. MEK terrorists are also suspected of handling patsies in recent false flag operations carried out in India, Georgia, and Thailand, which have been ham-handedly blamed on the Iranian government.

MEK is described by Council on Foreign Relations Senior Fellow Ray Takeyh as a “cult-like organization” with “totalitarian tendencies.” While Takeyh fails to expand on what he meant by “cult-like” and “totalitarian,” an interview with US State Department-run Radio Free Europe-Radio Liberty reported that a MEK Camp Ashraf escapee claimed the terrorist organization bans marriage, using radios, the Internet, and holds many members against their will with the threat of death if ever they are caught attempting to escape.

Not once is any of this backstory mentioned in the testimony of any of the witnesses before the senate hearing, defiling the memories of those who have been murdered and otherwise victimized by this terrorist organization. The de-listing of MEK in 2012 as a foreign terrorist organization by the US State Department is another indictment of the utter lack of principles the US clearly hides behind rather than in any way upholds as a matter of executing foreign policy.

American Support of Anti-Iranian Mercenaries a Prelude to Wider War 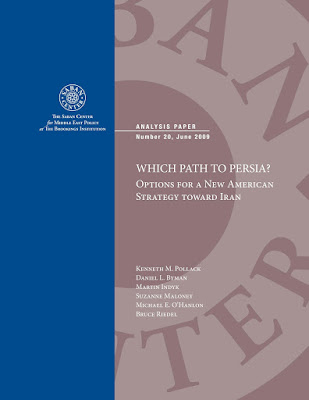 MEK has already afforded the US the ability to wage a low-intensity conflict with Iran. MEK’s role in doing so was eagerly discussed in 2009, several years before it was even de-listed as a terrorist organization by the US State Department in the Brooking Institution’s policy paper “Which Path to Persia? Options for a New American Strategy Toward Iran” (PDF).

Perhaps the most prominent (and certainly the most controversial) opposition group that has attracted attention as a potential U.S. proxy is the NCRI (National Council of Resistance of Iran), the political movement established by the MEK (Mujahedin-e Khalq). Critics believe the group to be undemocratic and unpopular, and indeed anti-American.

In contrast, the group’s champions contend that the movement’s long-standing opposition to the Iranian regime and record of successful attacks on and intelligence-gathering operations against the regime make it worthy of U.S. support.They also argue that the group is no longer anti-American and question the merit of earlier accusations. Raymond Tanter, one of the group’s supporters in the United States, contends that the MEK and the NCRI are allies for regime change in Tehran and also act as a useful proxy for gathering intelligence. The MEK’s greatest intelligence coup was the provision of intelligence in 2002 that led to the discovery of a secret site in Iran for enriching uranium.

Despite its defenders’ claims, the MEK remains on the U.S. government list of foreign terrorist organizations. In the 1970s, the group killed three U.S. officers and three civilian contractors in Iran. During the 1979-1980 hostage crisis, the group praised the decision to take America hostages and Elaine Sciolino reported that while group leaders publicly condemned the 9/11 attacks, within the group celebrations were widespread.

Undeniably, the group has conducted terrorist attacks—often excused by the MEK’s advocates because they are directed against the Iranian government. For example, in 1981, the group bombed the headquarters of the Islamic Republic Party, which was then the clerical leadership’s main political organization, killing an estimated 70 senior officials. More recently, the group has claimed credit for over a dozen mortar attacks, assassinations, and other assaults on Iranian civilian and military targets between 1998 and 2001. At the very least, to work more closely with the group (at least in an overt manner), Washington would need to remove it from the list of foreign terrorist organizations.

Proof that Brookings’ policy paper was more than a mere theoretical exercise, in 2012 MEK would indeed be de-listed by the US State Department with support for the terrorist organization expanded. The fact that former senators and retired generals representing well-funded corporate think tanks even just this week are plotting to use MEK to overthrow the Iranian government should raise alarms that other criminality conspired within the pages of this policy paper may still well be in play.

Lieberman himself suggests that proxy war and regime-change should proceed regardless of the so-called “nuclear deal” – with the 2009 Brookings report itself having stated that (emphasis added):

…any military operation against Iran will likely be very unpopular around the world and require the proper international context—both to ensure the logistical support the operation would require and to minimize the blowback from it. The best way to minimize international opprobrium and maximize support (however, grudging or covert) is to strike only when there is a widespread conviction that the Iranians were given but then rejected a superb offer—one so good that only a regime determined to acquire nuclear weapons and acquire them for the wrong reasons would turn it down. Under those circumstances, the United States (or Israel) could portray its operations as taken in sorrow, not anger, and at least some in the international community would conclude that the Iranians “brought it on themselves” by refusing a very good deal.

Clearly, both Brookings in 2009, and Lieberman this week have conspired to use the so-called “Iranian Nuclear Deal” as cover for betrayal and regime change.

For those wondering why Russia has intervened in Syria in the matter that it has, it should be plainly obvious. The US has no intention to stop in Syria. With Iraq, Afghanistan, and Libya behind it, and Syria within its clutches, it is clear that Iran is next, and inevitably this global blitzkrieg will not stop until it reaches Moscow and Beijing.

Even as the US adamantly denies the obvious – that is has intentionally created and is currently perpetuating Al Qaeda, the so-called “Islamic State,” and other terrorist groups in Syria, it is openly conspiring to use another army of terrorists against neighboring Iran, live before a US Senate hearing. Should the US succeed in Syria, it would not be the end of the conflict, but only the end of the beginning of a much wider world war.