Russia and the United States launched military talks on the Syrian conflict on Friday as Moscow stepped up its build-up of forces in the war-torn country.

The phone conversation between Russian Defence Minister Sergei Shoigu and US Secretary of Defence Ash Carter ended an 18-month freeze in military relations triggered by Nato anger over Moscow’s role in the Ukraine crisis.

Russia’s defence ministry said the talk marks a resumption of military-to-military cooperation between the countries and that the practise would continue, although Washington was a little more circumspect.

Spokesman Igor Konashenkov said the call lasted one hour and focused on “the necessity to coordinate bilateral and multilateral efforts to combat international terrorism”.

Washington has expressed concern over any Russian military build-up in Syria as a boost to President Bashar al-Assad, accusing Moscow of sending ships, artillery and tanks.

And on Friday, a US official said four Russian fighter jets had been seen on the Latakia airbase in Syria.

Moscow argues that any military support falls in line with existing defence contracts, but reports have surfaced of secret deployments to Syria, where Moscow has a Soviet-era naval facility and where the Assad regime is battling Islamic State (IS) extremists.

“If there is any request then it would naturally be discussed and evaluated through bilateral contacts and dialogue,” the spokesman was quoted as saying by Russian news agency RIA Novosti.

Putin has provided vital support to Assad throughout a popular uprising against his regime that has fuelled a brutal civil war killing 240,000 people and displacing four million.

Syria’s Foreign Minister Walid Muallem denied any Russian involvement in actual combat, adding that the Syrian army was capable of fighting and only needs more weapons.

“Up to now there is no joint combat on the ground with Russian forces, but if we need them we will look into it and ask,” he said on state television. 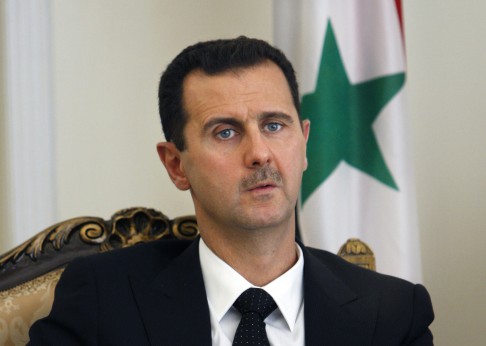 Washington has repeatedly warned Moscow that bolstering Assad will only make the situation worse, and Secretary of State John Kerry repeated this on Friday, despite agreeing to the renewed dialogue.

“Obviously the focus remains on destroying ISIL and also on a political settlement with respect to Syria, which we believe cannot be achieved with a long-term presence of Assad,” he said.

“But we are looking for ways in which to try and find a common ground.”

The resumption of contact with the Pentagon is a welcome step for Moscow as Putin pushes for a broader coalition against the Islamic State group and seeks a more prominent international role after being ostracised over Ukraine.

Russia-US military-to-military contacts were stopped in March 2014 after Russian troops’ involvement in the annexation of Crimea from Ukraine.

Russia and the West are currently locked in their worst standoff since the Cold War over neighbouring Ukraine and both the EU and the US have slapped sanctions on Russia for fuelling a separatist rebellion across the border.

A report in Russian online newspaper Gazeta.ru, which has previously written about Russian soldiers in Ukraine, said that some soldiers may be headed for Syria in covert deployments.

It quoted a soldier named Alexei as saying that troops had been sent to a southern Russian port city without being told where they would be shipped and were expecting to be deployed to Syria on verbal orders.

Some worried family members are already contacting rights groups, however, said Valentina Melnikova, who campaigns for rights of soldiers.

“We were contacted by relatives of officers, professional soldiers, who were sent away on a train with their travel passports towards the south, and weren’t told about their destination,” she told Echo of Moscow radio.

“Relatives were afraid that they are being sent to Ukraine or Syria.”

Western diplomats say Putin may now be trying to come in from the cold by exploiting the West’s desire to end Syria’s bloody conflict that has prompted a stream of refugees to Europe.